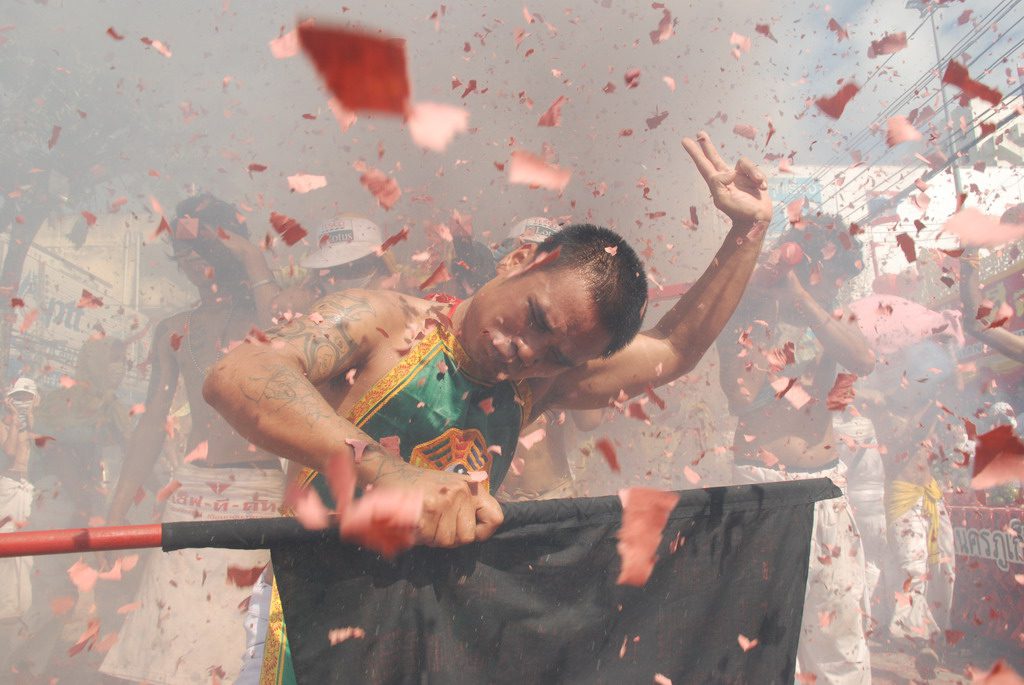 Back to Charter News
Search
13th October 2015
Share this

What is the Vegetarian Festival

If you are on a sailing trip through the Indian Ocean around Phuket this month, then you must stop to experience the internationally renowned Phuket Vegetarian festival which is running from 12th October until 22nd. Over 9 days, the southernmost province of Thailand will be awash with ceremony, celebration, and accompanying festivities.
About the ceremony

The colourful festival is held to celebrate the Chinese belief that abstinence from meat and various other stimulants during the ninth lunar month helps obtain good health and peace of mind. The festival is famous because it is about so much more than vegetarianism. Also known as the Phuket Nine Emperor Gods Festival, a form of the festival which takes places to allow for purification dates back to as
early as 1825. In a time where black gold mines were flourishing, and with it a surge of incoming Chinese or Fujian migrants which caused epidemics, and after the first Opium War came dreams of religion and ritual for protection. 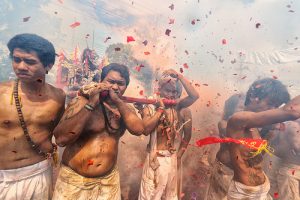 Chinese Opera Troupes were brought to Phuket to perform rituals, but after sickness kept coming, they led the locals to fat and pay homage to the Jade Emperor God (Yoke Hong Song Teh) and the Nine Emperor Gods (Kiu Hong Tai Teh). This happened during the first to the ninth Chinese lunar month, and somewhat miraculously cured ailments of the area. An emissary was later sent to China to
ritualise and invite to the gods to come to Phuket, the Opera Troupe brought back sacred artefacts that symbolised the ritual calling including a sacred ash urn, scripture, and a carved wooden plaque. Upon his return in the ninth month, locals greeted him with festivities and this was the start of the celebrations we see annually in Phuket today.

The ceremonies and rituals include a number of self-mortification elements by participants who are acting as mediums for the gods. Some of them make quite a spectacle which is what drawers in tourists and onlookers from right around the country. Men and women alike puncture their cheeks with a variety of household items on a path to purification and it is not always easy to watch. In 2011, there were around 74 injuries reported, and one death.

Purpose of the ceremony 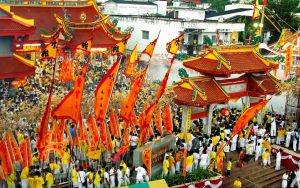 The ‘pilgrimage’ still happens, and ashes are brought back to be added to the pot to symbolise infinity and continuity between generations. The urn is believed to be spiritualised by the presence of the gods and is a great focal point for the festival. The philosophies associated with the festival all have links to cosmology and cosmic symbolism which makes it even more magical. The festival is to cleanse the community and worshippers of their sins, it is a festival of renewal and purification which is where the vegetarian element comes in – cleansing the body. It is thought this process limits the chances of misfortunes in life and calls forth good fortune and is believed to help bring about success, prosperity, and longevity (Hok, Lok, Siu).

[mappress mapid=”5″]There are ritual cites and celebration areas right around the city. The festivities are normally concentrated around the six Chinese temples that are peppered across Phuket – the main one being the JuiTui Shrine which is close to the Fresh Market in Phuket Town (another popular tourist attraction). There are in total more than 40 Chinese shrines around the island, all of which participate, but the six biggest are the centrepieces of the festival. The five oldest are Put Jaw, JuiTui, Bang Niew, CherngTalay, and Kathu Shrine. Some others that are also worth visiting include:

The major themes of the festival and its rituals are the strengthening of community solidarity and identity, enhancing the spiritual and physical wellbeing of attendees, and the promise of future good fortune. 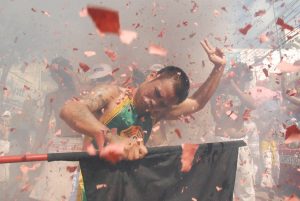 The Preliminary Rituals take place on the last day of the eighth lunar month. These include a demarcation and consecration ritual which prepares the main festival compound for the festivities. There is particular focus here on the kitchen within the shrine, as this is where the vegetarian food will be prepared for locals to consume which in turn enables the cleansing process. The tall Lantern Pole Raising Ritual is also before the nine days of celebration in the preliminary stages. This pole contains nine wicks in oil symbolising the Nine Emperor Gods which are suspended throughout the festival.

There are a number of slightly less conventional rituals that take place too. The Heavenly Warrior-Releasing Ritual is where demons and orphan souls are released on an annual basis to protect the community and the festival. These beings are able to take the first step up the ladder of merit to redemption. This is then followed by a food offering which pays respect to the warriors and horses as mediums are possessed by their spirits as vegetarian food, Thai tea, and rice liquor are prepared for their consumption. 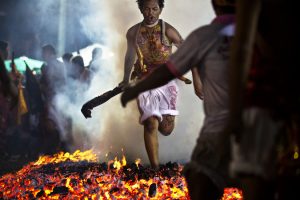 The most significant ritual of them all is the Nine Emperor Gods Invitation ritual. Prior to this The Jade Emperor God ritual symbolises the Emperor is at the head of the Taoist Pantheon. The Nine Emperor Gods Ritual is conducted near the water, and a pair of wooden blocks are thrown to see if the Gods have descended from heaven and arrived to the shrine. The incense urn containing their spirits are put in a secluded darkened room for the duration of the festival, into which only the censer master is allowed to enter.

The Seven Stars Propitiation Ritual takes place the evening before the main attraction; the street procession. This ritual is said to bring forth the power of ‘Tao Bo’ (Polaris) through the stars. There is also a fire-walking ritual which is said to help those who take part overcome impurity and repel evil influence. Locals believe that if you are clean souled then you are immune from burning. The Ceremonial Bridge Crossing Ritual sees those devoted to the festival cross a bridge which cleanses them of impurities and any future misfortune. Once across they receive a red stamp to signify their journey. Then there is the Bladed Ladder Climbing Ritual during which the mediums climb 36 rungs and descend down 72 (3 add 6 is 9, as is 7 add 2, 9 being the all-important number for this festival.

The street procession is the most iconic part of the Phuket Vegetarian Festival. The processions ensure that the most possible people are included in celebrations as onlookers are blessed. Many locals set up alters in front of their houses, and elaborately decorate the fronts of their homes and garnish the streets with lit candles and incense. 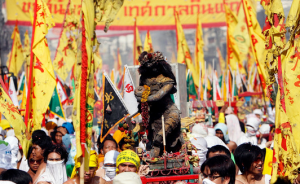 As well as these series of rituals, chanting is commonplace throughout the festival. As with singing, the act of chanting provides a sensual pleasure and is thought to cleanse the psyche and calm the nerves.As well as chanting, firecrackers are common practice throughout the festival.It all closes with a Farewell Ritual and vegetarian feast, which sends the Gods on their way until the celebrations the following year. Much of the vegetarian food consumed throughout the festival could be mistaken for meat – with soybean and protein substitute products in use which look a lot like it. Yellow flags with red Chinese or Thai characters on them signify vegetarian dishes and food stalls of which there are plenty to sample around this time of year.

The practice during Vegetarian Festival

The whole festival which exists to cleanse the body, the mind, and the soul is governed by the five Buddhist Precepts. The first is by far the most important, and iconic. It is to abstain from killing, which is why the festival is vegetarian element is so key to the festival. It

means that all living things are spared over the course of it, and that hands can remain clean both literally and metaphorically speaking. The second is to abstain from stealing to show respect in the presences of the Gods and for the festival and what it is trying to achieve. Third; abstain from sexual behaviour for reasons of purity and focus. The fourth is to abstain from lying – truthfulness is an important part of the cleansing process. Lastly is the abstention from alcohol, as this clouds the mind and often leads to other impure choices.

There are a number of other governing principles which are expected to be followed albeit not as strictly as the former five. These are abstention from gambling, adorning oneself with jewellery and leather goods (and anything made from animal hide), and avoiding wearing any colours other than white (a colour connoting purity and simplicity). It is also advised as best practice for anyone in mourning or any menstruating or pregnant women to take part in any of the rituals. As per usual vegetarian practice, all kitchen crockery and utensils are also supposed to kept solely for vegetarian cooking and dining within the festival.

It is a truly vibrant and interesting time to visit the city, with the festival atmosphere permeating through its entirety.

We still want your yacht for charter in Thailand and SEA!