Back to Charter News
Search
13th February 2015
Share this 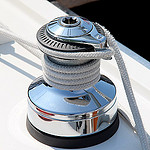 If you are about to go on your first yacht charter holiday or haven’t been on a yacht charter for a while, it can be somewhat bemusing as to what all the names are of all the different ropes that are used onboard your yacht charter. It is quite confusing, but if you read our guide then you will have plenty of time to refresh yourself before hitting the water here in Thailand or Malaysia, which will help you to understand exactly why rope is not just called rope!

Yachting has a very colourful and extensive vocabulary that has evolved over many many years of marine history. Rope is the general term used for the actual raw material that is used to make the ‘lines’ that we use on board a sailing yacht. Once a piece of rope has a specific use on board a yacht it becomes a ‘line’.

The ‘running rigging’ refers to all the moveable lines that are used to pull the sails up and adjust them. When the rope raises up the sails, it is then called the halyard, and if it pulls the sail down or out on a mast or boom, it is then called the downhaul. That same rope will also tie the sail up and around the boom, this then becomes called a reef point. If it holds the boom up off the deck, it’s now called a topping lift.

The ropes that are used when sailing are all called ‘sheets’ and each of these ‘sheets’ has their own name depending on which sail they are controlling, so when you trim the mainsail you use the ‘mainsheet’, when trimming the jib, you will adjust the ‘jibsheet’. Unless it pulls through a little hole near the forward corner of the sail, then it becomes known as the ‘cunningham’ or the ‘kicker’ which are both used for sail trimming.

A yacht can be tied up to a jetty or pontoon by using ‘docklines’ or ‘warps’ and even each of these docklines has it’s own name eg. sternline, bowline, springline or breastline, dependent on whereabouts on the yacht the line is attached to.

If you have a small dinghy with your yacht charter, then the piece of rope that is attached to the bow of a dinghy to secure it when you take it ashore, is known as a ‘painter’.

There is also standing rigging on your yacht charter too, which refers to all the lines that support the stationary objects on board, for example the mast. The rope used for these tasks is often made from steel cable and will be called either ‘shrouds’ or ‘stays’. The cable that runs from the mast to the bow of your yacht is called the ‘forestay’, and the lines that run to the stern of the yacht are often known as ‘backstays’

There only a couple of examples of lines that are actually called ropes on a yacht; a ‘bolt rope’ a line which can be attached to the edge of a sail or even a ‘bell rope’ used to ring a ships bell!

So there you have it, clear as old rope?