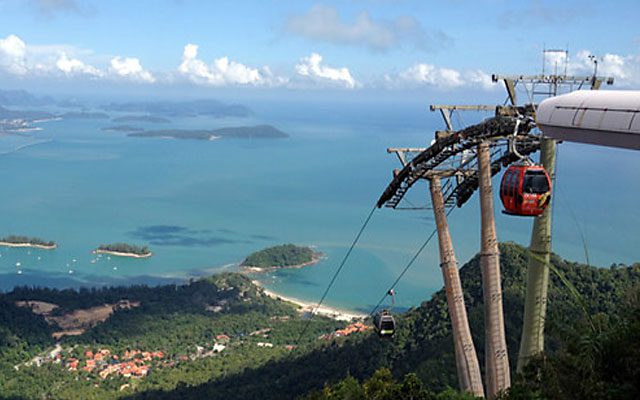 Back to Charter News
Search
20th August 2016
Share this

As well as the Island of Phuket, Simpson Yacht Charters also help yachters explore the wonderful sailing in Langkawi.

It is on the North Western coast of the Malaysian Peninsular in the Malaccan Straits. It is very close to the equator too!

Langkawi is home to some of the most stunning beaches in Malaysia – its cluster of 99 islands which means there are ample shorelines to explore whilst yachting. There are so many little pockets of wonder throughout this region, you would be hard pressed to see it all – but we can help you try! The islands have become popular due to their tax free status, but also due to the mythical nature of the place and the legends and fairytales that enchant the locality.

Langkawi is officially known as Langkawi the Jewel of Kedah – 30km off the coast of Malaysia the islands form part of the state of Kedah (hence the official name). Just adjacent to the Thai border, Langkawi Island is the biggest of the cluster. It has a population of around 65,000 residents.

Some of the mysticism of Langkawi lies in the legends of the kingdom of Kedah. These legends talk of a snake known as ular-besar, to which the King must sacrifice a virgin daughter upon ascension or also when a war was declared as a sacrifice to the gods.  Such tales were recorded by Chinese travellers under the Ming Dynasty. The French were also recorded to have visited the region in the late 1600s.

Historically Langkawi was home to seafarers that originated from the southern part of the peninsula. There were also fisherman, and real life pirates right up until 1945 frequenting the spirited shores! There were rumours that the islands were cursed for a few centuries due to the wrongful death of a lady accused of adultery who placed the curse on the area. Just one example of the quirky stories locals can tell you which provide endless amusement and wonder! 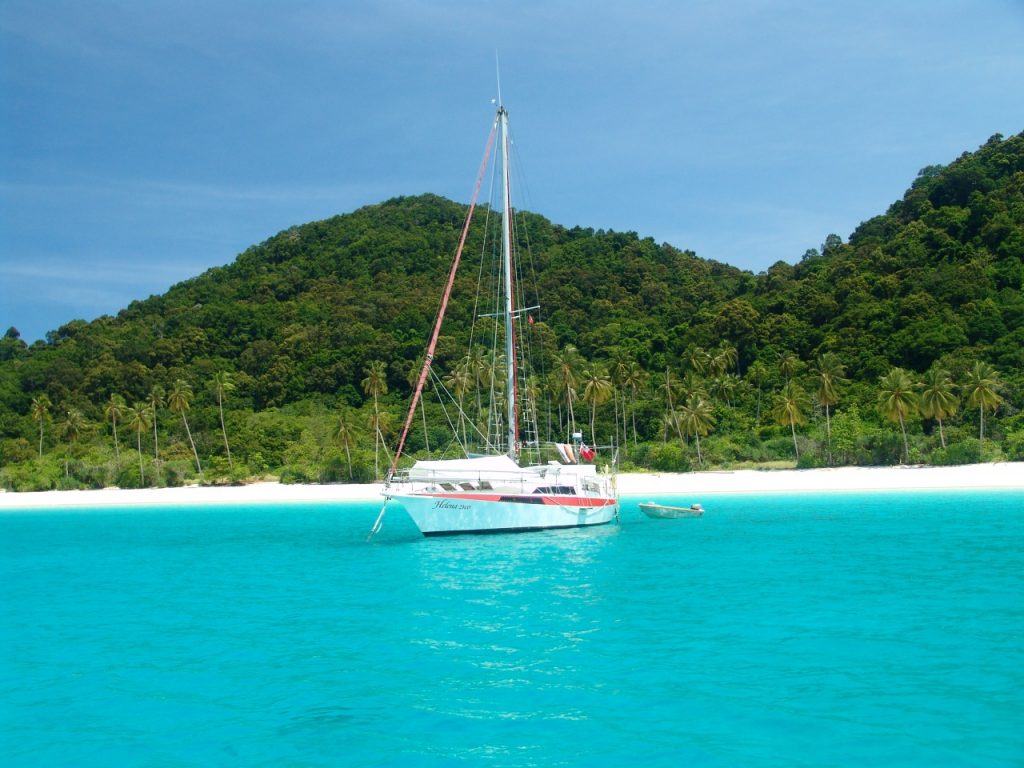 There is also a dark history to the islands, such as the Siamese invasion of 1821 where the granary at Padang Matsirat was burnt to the ground to starve the local armies. They captured the island later in 1822 when they killed the leaders, and enslaved much of the population whilst others fleed. The same happened again in 1837, and the area only recovered after Sumatrans came and settled. In 1909 the British had their turn at an overthrow, but after World War 2 the area became a Japanese territory. Finally gaining its independence in 1957, the area we know and love today began to bloom.

The total land mass of all the islands put together is thought to be around 48,000 hectares – this runs across 25km from North to South, and perhaps around 30km from East to West. The coastline is characterised by limestone ridges and flat plains, and inland is dominated by lush green forests, rolling hills, great mountains, and natural vegetation. The oldest part of the island in terms of geography is the Teluk Datai formation at the north west of the island which is created mainly from sandstone, shale, and mudstone.

The economy of the islands is mostly agriculturally based. There are a number of rice paddies, as well as rubber cultivation areas, and large fisheries.

Tourism however also forms an important part of the economy, and so whilst yachting in the area there are many opportunities to go onto land and shop, eat, drink and be merry! All of which helps support local people, and also conservation efforts to protect the beauty of the area.

The government is keen to accentuate the tourism element of the economy, and therefore puts a lot of money into highlighting the ecological individualism of the islands.

The islands were given a World Geopark status by Unesco in 2007. The main conservation areas are Machincang Cambrian Geoforest Park, Dayang Bunting Marble Geoforest Park and last but not least Kilim Karst Geoforest park. These areas are the most popular areas for tourists, and due to their protected nature are something you don’t want to miss.

So what actually is a geopark? A geopark is an area comprised of a well-defined limit with a large enough surface area to serve economic development in the locality. A critical facet of a geopark or geoforest is that it has within it a number of heritage sites, that are protected due to their interesting geological make up or scientific importance, Geoparks must have within them areas of specific and rare interest, and be a shining example of natural beauty. Other characteristics include points of ecological, historical, cultural, or archaeological worth.

Geoparks were an idea conceived by the United Nations Educational Scientific and Cultural Organisation (UNESCO) in response to an international need for protecting sites of special interests. All nationalities come together in the Global Geopark Network (GNN) which is a platform for intellectual exchange, ideas sharing, and more for experts and people who work in the field.Together they innovate to create strategies and models of best practice for all to learn from. The overarching aim is sustainability and economic benefit rolled into one through sustainable tourism and other cultural activities.

The Kilim Karst Geoforest is home to the Kilim River. This is an area particularly rich in wildlife and a perfect spot for animal lovers. There are the really interesting hairy nosed sea otters, monitor lizards, and macaque monkeys that swim in the waters there – which is pretty amazing. There are also a number of caves to explore, as well as the famous mangroves. You really won’t be short of something to do there.

Many of the islands across Langkawi provide unspoilt rainforests abundant in exotic animals and plant-life which makes for the perfect backdrop to your yachting adventure with Simpson.

The weather in the region is glorious year round. The heat and the heat and the humidity with occasional rainfall providing a little respite is perfect explorer weather.

Its tropical nature is thanks to its position close to the equator, which also means the Andaman Sea surrounding the islands is calm all year long, which creates ideal yachting conditions.

Although conditions are great right through the year, it is thought that the best time to visit is between November and April when there is the best balance of sunshine and light showers. During this time you can expect average temperatures around the 32°C during the day, only dropping to 28°C or so in the evening time. Whilst the sun rules during the day, more often than not clouds roll over during the evening which makes a great opportunity for some dramatic cloud grab photos. September and October can be a little wetter due to the monsoon winds, and there is the occasional impressive thunderstorm too which just adds to the majestic aura of the place. This kind of weather affects the east coast more thank Langkawi.

Due to the waters calmness, there is plenty of opportunity to enjoy water sports too such as banana boating 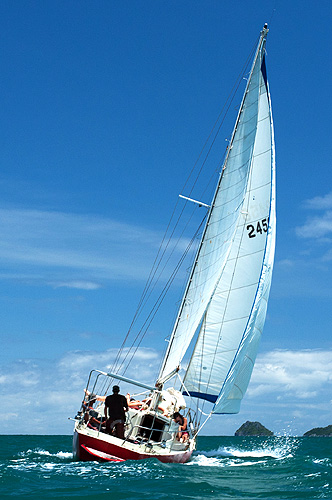 , parasailing, scuba diving, snorkelling, jet skiing and more! If the weather does take a turn for the worse there are always the numerous shopping malls, or well-known spas and pamper packages to enjoy.

In terms of islands and beaches there are two main locations – the southern islands which is a popular spot for tourists, and the north east area which is a little more secluded and so makes for the perfect quieter sunbathe. One island that is particularly popular due to its fresh, lake-like water is Lagun Island. Dendang just next door has a beautiful bay which is perfect for the yachtsman. Pantai Cenang is another great choice, the beach has the idyllic long white beaches that appear to stretch on for miles. This one is fabulous for dining too, and there you can also more often than not find an intriguing array of entertainment in the evening. There is nothing quite like watching the sun go down whilst listening to some local live music. Coconut trees line many of the beaches, and there is usually plenty of birds flying around for you to get your nature fix.

Another spectacular activity available on the islands is the cable car ride. The Langkawi cable car will take you up to the top of Gunung Mat Chinchang, and here you can find a second wonder – the Langkawi sky bridge! The sky bridge has just been updated and so is bound to get busy again soon, so get in there quick! Before you get on the cable car you can also visit many of the attractions around the oriental village which is awash with artistic and cultural delights.

So yachting in Langkawi can certainly tick all of your boxes for that special getaway. Whether it be shopping in one of the many malls, markets or fairs, sitting on the beach, exploring caves and mangroves, bird-watching, or hiking. Then of course there are all the water based activities too! The possibilities are truly endless in this magical cluster of Malaysian islands.

To find out more about your trip, give us a call today.