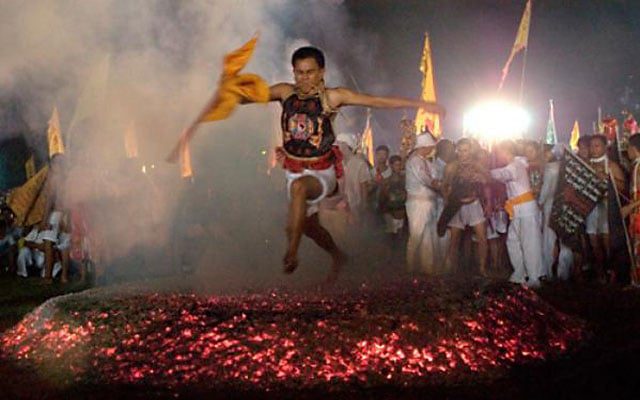 Back to Charter News
Search
3rd October 2016
Share this 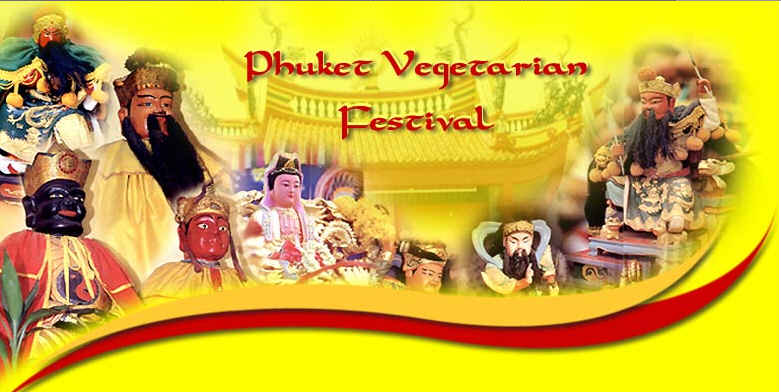 Phuket Vegetarian Festival has kicked off for a 10 day long celebration of everything vegetarian. The annual occurrence is something people come from far and wide to experience, and the festival is renowned world-wide as one of the best of its kind. 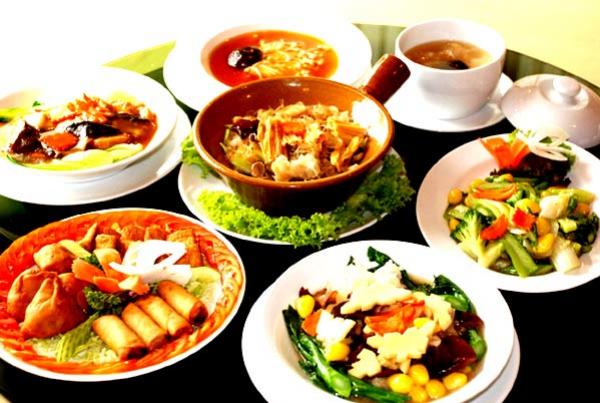 During the festival participants maintain a strict vegetarian diet. It is said this helps sharpen the mind, and strengthen the body.

It is to refrain from the vice of eating dead flesh, and killing innocent animals. The whole festival is a celebration of health, good hygiene, goodness, and serves to promote inner peace.

History of the festival 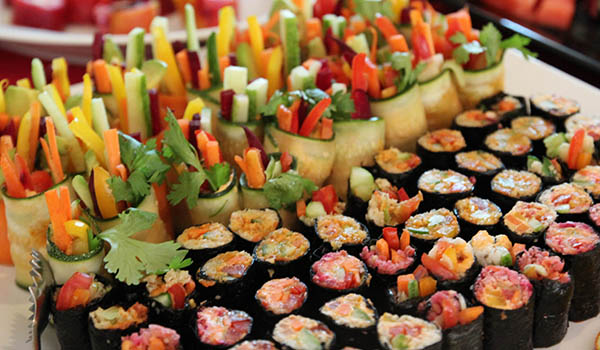 Locally known as Jia Chai, the festivities have been traced back as far as 1825 when vegetarianism was adopted by Chinese miners under Governor PrayaJerm to combat a fever that struck workers in the jungle in the Kathu district. It was believed that keeping to such a diet would help them combat the maladies afflicting the population as the act honoured two empower gods; The Yok Ong Sone  and The Kiew Ong Tai. It is said that this transition in diet did just that, and the illness disappeared from the area.

The workers at this time were originally from China, and history tells us that one member returned to Kansai to invite the sacred incense smoke known as Haiolan, and the name plaques known as LianTui back to Thailand. This traveller brought back holy writings which are used in the festival on the seventh night. People learned of this journey and fled to march alongside him to bring back the sacred artefacts – and that was the start of the parade we know today. 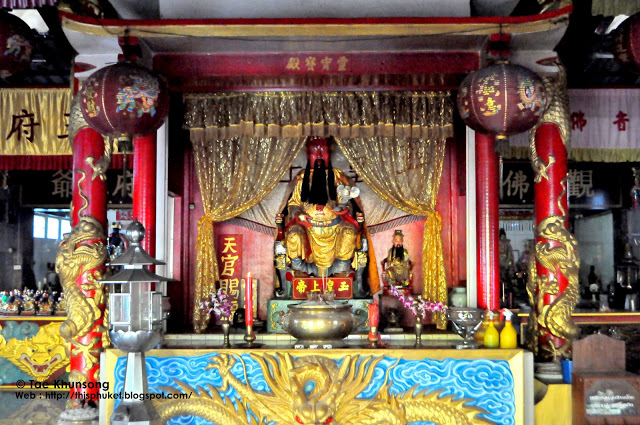 As a result of the illness being quashed, swathes of people joined the rituals and the diet, meaning it formed an integral part of the faith of the region. This was the starting point of the festival which begins on the first evening of the ninth lunar month, continuing until the ninth. The festival was established to spread the good luck experienced on that first instance to the wider community for all to benefit from the spirituality and nutrition linked to vegetarianism. Today around 30-35% of Thai people are vegetarian – similar to the number in China, the only place in the world with higher numbers is nearby India with an estimated 40%. 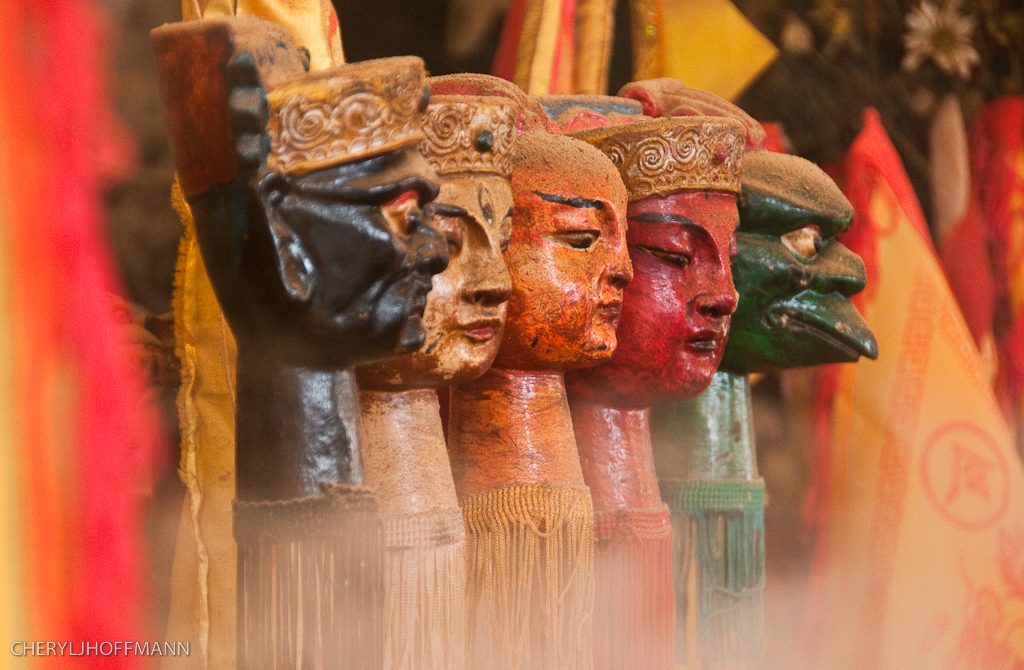 Also known as the festival of the Nine Emperor Gods, the 10 days is still to this day cram packed full of fire, food, and ritual. Year in year out performers try to outdo last year’s offerings, and some of the acts look to be mightily painful. It is believed however, that the gods inhabit the performers bodies during celebrations to protect them from the elements. There are 24 Chinese shrines around Phuket that are central sites for the festival, each of which hosts their own kitchen in which some of the best vegetarian food in the world is prepared. As these areas are prepared, demons are released by the Taoist Master to protect those who take part in the festival for its duration. 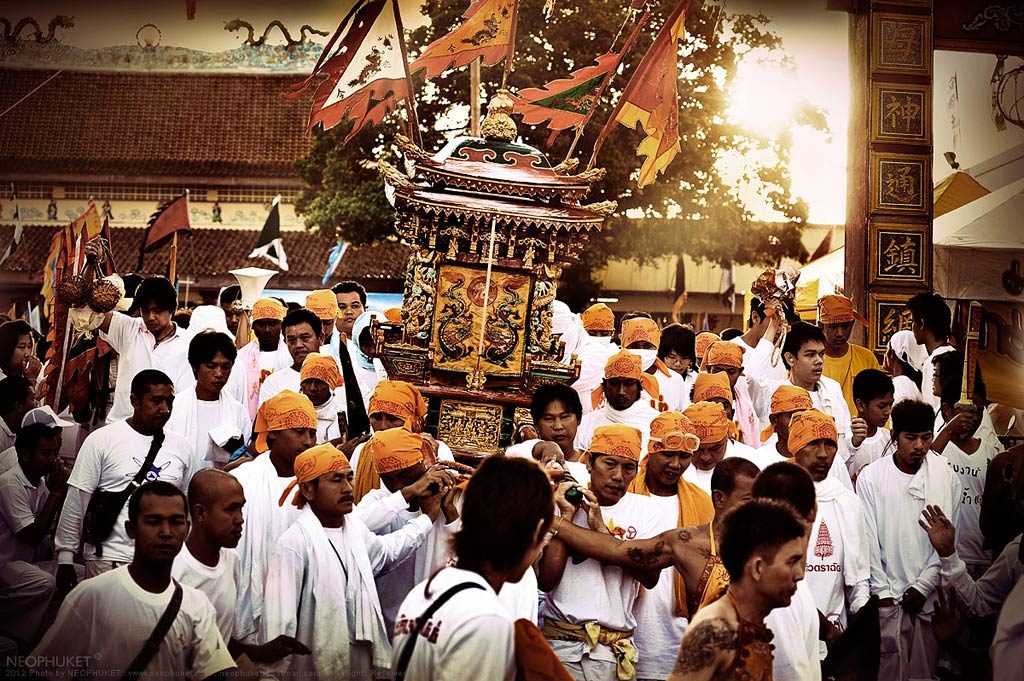 place every day at the various sacred sites around the province, and people attend in their thousands to receive blessings from the gods. The Ma Song as they are known, are those who offer themselves as mortal mediums to translate for the gods as such.

They are the famed performances of the festival with gruesome displays of flesh cutting with maces and axes as well as piercing with nails, skewers and guns. Whilst walking through the festival you can often see such people with various objects hanging by hooks from their chests and backs. This year someone was even seen with a model boat hanging from their torso!

Because the festival is one of purity, alcohol and drugs are strictly forbidden throughout the ten days. Virtuous behaviors are expected at all time, and so this creates a lovely atmosphere of acceptance, peace and love. This is where the links to Buddhism come in. Somewhat controversially however, this also means that people who are in a state of mourning, or who are pregnant or menstruated are not allowed to take part in the ceremony. 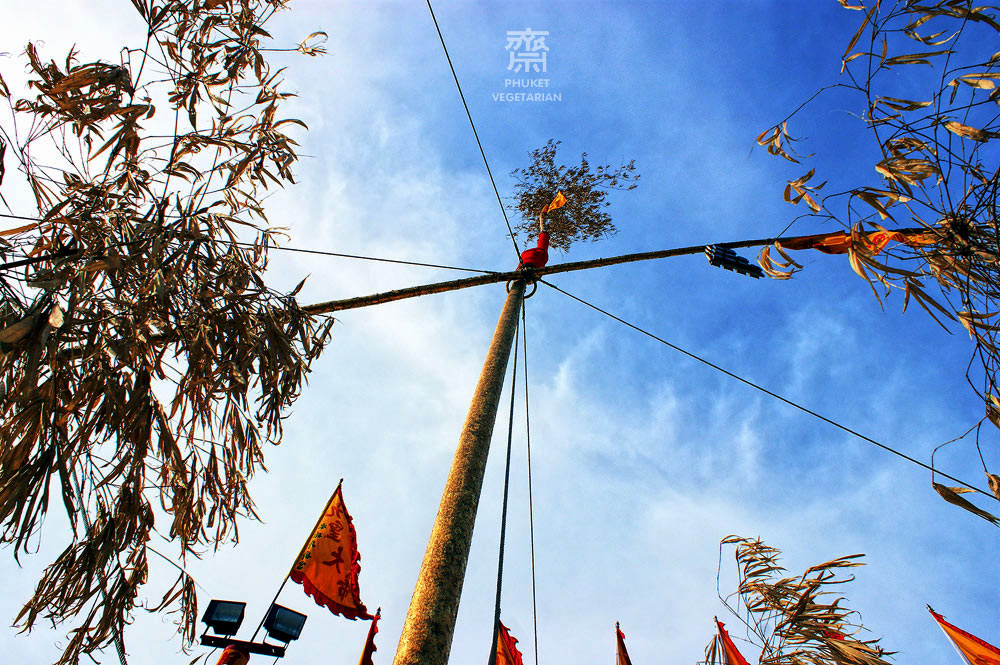 The first ritual of the festival in Phuket is the afternoon before where poles are erected at each temple. These are known as the Go Teng poles and are the means by which the gods descend to the earth to bless the food the people will eat. These poles are lit with lanterns to signify the start of the festival. This year, Phuket’s new Governor Chockchai Dejamornthan arrived to the island at midday to open the festival and to preside over the lantern pole raising ritual. The opening ceremony this year also featured almost 200 cannon fire crackers and 10,000 ordinary fire crackers. 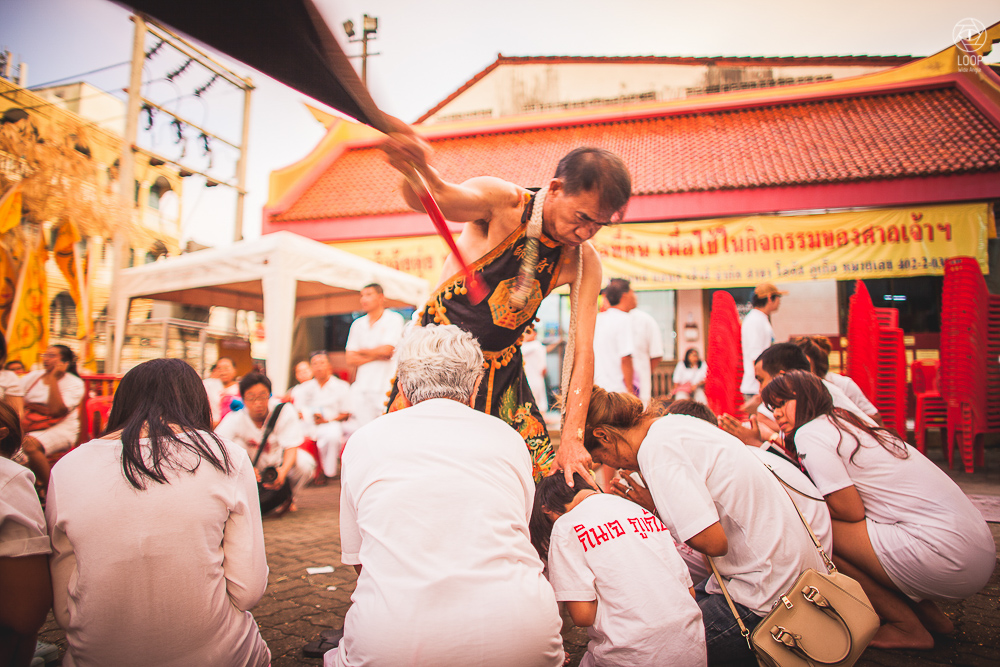 The gods are a pivotal part of the festivities. Gods Lam Tao and Pak Tao are invoked and these are said to keep track of the living and the dead. Here is where you can experience some of the most impressive ritualistic entertainment of the festival with people climbing bladed ladders, walking through fire, and bathing in hot oil.

As with all festivals there is the usual musical accompaniment. However, with the Phuket Vegetarian Festival there are an inordinate number of drums, at deafening volumes. It is said that the loud noises of the ceremonies help to drive evil spirits away and protect the community and their celebrations.

The most breath-taking part of the 10 days has to be the final ceremony however where the gods are released back to the heavens through the most impressive display of fireworks. The last night always draws the biggest crowds, so if you are intending to go, go early to ensure you get a good position to view the spectacle from.

Vegetarianism as a trend
Although numbers of vegetarians are still high in the region as previously mentioned, there is a trend emerging.As countries accrue more wealth, the amount of meat consumed tends to rise too.

Meat eating is seen as something the rich do, and it has become a bit of a status symbol despite the obvious health and environmental benefits of not consuming animal produce. At the same time though, veganism is also on the rise world-wide for those very reasons.

The difference between veganism and vegetarian is that vegetarians only forgo meat, but vegans give up all animal produce including milk, eggs, butter, cheese etc.

There are a selection of attendees of the festival who choose to go that step further into veganism. These people dress in white to signify their ultimate purity and the ultimate cleanse.

Veganism is more of a holistic lifestyle choice as many vegans also refuse to buy into any industry which uses animals – such as fashion (leather and wool), circuses, zoos, some cosmetics, alcohols, and cleaning products. With a greater awareness of the links between the animal agriculture industry and climate change, veganism is on the rise. But people also choose to become vegan for reasons of animal welfare and rights, as well as personal health – so you see Thailand was massively ahead of the curve; a bit of a trend setter some might say!

For most who make the conscious choice to reduce their consumption of animal produce, the transition is a slow one. You may first want to consider going pescatarian (still consuming fish), then veggie, then vegan. So if you have been toying with the idea of becoming a vegetarian for some time, there is no better way to start than a yachting holiday to Phuket at this time of the year to experience the culture that started it all. 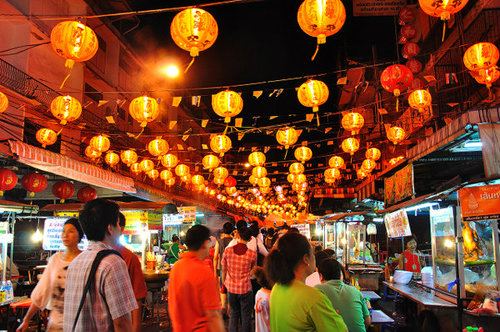 [su_row]
[su_column size=”1/2″] The Vegetarian Festival is a huge lure for visitors from all over the world. As well as the famous Ma Song artists, and the spectacular fireworks on the last night of the event, it is the colours and the atmosphere of the festival that makes it such an attractive time to visit. The vibe is unbeatable. Each year the festival attracts around 250,000 visitors – most of whom are Chinese, Malaysian, and Singaporean. [/su_column]
[su_column size=”1/2″] In fact the festival has become so popular that this yeah there is a ‘copycat’ festival in Bangkok. Tourism Officer Chief Anoma Vongyai says that this alternative offering will have no impact on the numbers visiting the original Phuket festival. If anything this secondary festival will just help to spread the ethics of peace that are embodied within the event to an even wider audience which can be no bad thing. [/su_column]
[/su_row]
[su_row]
[su_column size=”1/2″] Tourism is a very important part of the island’s economy, and events which so perfectly encompass traditional Thai cultures such as the vegetarian festival are a big draw for people. One of the favorites is also the dragon dance of China Town. This particular parade is full of floral offerings which is a sight to be treasured as well as an aroma to be remembered. There is a certain romanticism around this specific part of the festival, embodied in the choosing of a local girl to represent the Goddess of Mercy. [/su_column]
[su_column size=”1/2″] The aura of the festival is one that transcends cultures and languages, as it is all about spiritual cleansing, togetherness, and casting out evil. Therefore, tourists are embraced at this time like no other, and it really is a special time to explore Phuket. The festival’s presence is felt right across South East Asia with many celebrations cropping up all over the region, meaning this time of year is a particularly good time to explore by yacht – as you never know what you might find when you dock. [/su_column]
[/su_row]